Bats are amazing animals that are vital to the health of our environment and economy. Although we may not always see them, bats are hard at work all around the world each night- eating tons of insects, pollinating flowers, and spreading seeds that grow new plants and trees. Step outside around dusk and take a few moments to look for bats in your neighborhood!

The Wonderful World of Bats 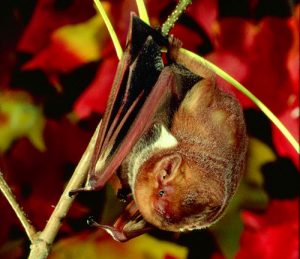 Worldwide, there are more than 1,300 species of bats, that’s almost 20 percent of all mammal species. Bats live almost everywhere on Earth except the most extreme desert and polar regions. So, no matter where you live, it is almost certain that there are bats living near you.

Bats come in all shapes and sizes, from the tiny, adorable bumblebee bat that weighs less than a penny to the big, beautiful flying foxes that can have a wing span of up to six feet. They can be white, brown, black, gray, red or even spotted or striped! Some bats have big eyes and long slender snouts that help them reach deep into flowers for nectar. Other bats have small eyes and large ears, some with wrinkly faces or nose leaves to help them echolocate to navigate and find insect prey. Whether you find them beautiful or bizarre, bats are unique and fascinating animals.

Bats are the only mammal that can truly fly (although some mammals “glide”.) A bat’s wing structure is actually a modified hand. The finger bones are elongated to support a thin membrane of skin that extends between each finger, arms, and body. The membrane of a bat’s wing is living tissue similar to the tiny flaps of skin joining the bases of our human fingers. These “hands” have been adapted for flight, and the flexible skin and many moveable joints make bats exceptionally agile fliers.

A Golden-crowned flying fox, Acerodon jubatus, is the largest bat
on the planet by weight, weighing up to 2.6 lbs.
Photo: Yushi Osawa / Bat Conservation International

Blind as a Bat – No Such Thing

Contrary to popular belief, bats actually have good eyesight (similar to that of humans), and some bats use their eyes to find food. But, for bats that eat insects, eyesight isn’t their main means of navigating or locating prey. How do bats catch quick-moving, flying insects in the dark? They use echolocation, emitting very high pitched sounds (higher than human hearing range) that bounce off obstacles in their path, like trees, other bats, buildings, and their main target- delicious insects! Bats use those reflected sounds to identify what an object is, how big it is, and what direction it is moving.

All this flying and echolocating makes bats really hungry! So come nightfall, bats are busy searching for- and eating- all kinds of foods! Most bats in North America eat insects, including moths, beetles, aquatic insects, and flies. A single bat can eat up to its body weight in insects each night! Eating all these insects helps protect our food crops and forests from insect pests, saving farmers and forest managers billions of dollars each year.

Some bats eat pollen, nectar or fruit. These bats are vital for pollinating flowers and spreading seeds that grow new plants and trees. A few bats eat meat, like frogs and fish, and three species of bats feed on blood. No matter what their diet is made up of, each kind of bat is unique and interesting.