Passionate and precocious, the next generation of bat conservationists bring their enthusiam to their peers via the Web. 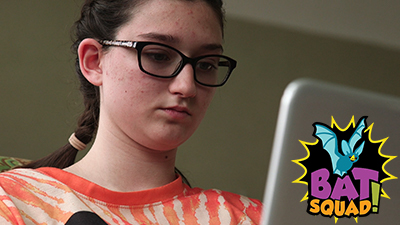 Rachel writes for the Save Lucy Blog
Credit: Miceala Jemison

“There’s Shark Week. Bats deserve a week, too, that’s just all about them!”

Rachael Block laughed and shrugged when asked why she loves bats enough to write about them every week for the Save Lucy Campaign’s bat rehabilitation blog.

“Their wings. How they hang upside down and you see their faces staring down at you when you look up at them. Everything, really.”

But Rachael isn’t a professional blogger; in fact, she relies on her parents to drive her anywhere. Now 14 and just beginning high school in Burke, Virginia, she began writing for the Save Lucy blog in 2013, as a 6th grader. 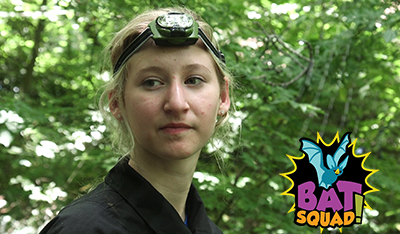 Alexis Valentine, 14, of Gatlinburg, Tenn., agreed. Bats don’t deserve their bad rap, and this is the sentiment that drives her as she has helped university professors work with bats and research White-nose Syndrome (WNS) in the Great Smoky Mountains National Park since the third grade.

Rachael and Alexis aren’t alone in their motivation to seek out and share knowledge about bats with their friends, families and peers. They are part of a group of young people who will be introduced to middle schools across the country during the third annual Bat Week, held this year from October 24-31. An initiative of a growing number of partners including BCI, the U.S. Fish and Wildlife Service, the U.S. Forest Service and other government and conservation groups, Bat Week seeks to raise greater awareness of bat conservation efforts worldwide.

“The key thing for conservation is for people to feel invested,” said BCI’s Director of Communications and Public Engagement Micaela Jemison, who spearheads BCI’s leading role in organizing Bat Week. “It’s not a coincidence that Bat Week is the week of Halloween and targeted at kids old enough to understand the issues that face bats, but young enough for bats to still be cool. We want to inspire the next generation of bat conservationists.”

One major highlight of this year’s event is “Bat Squad!” This series of four, 15-minute webcasts that will dive into the efforts of nine young people to educate others on the benefits of bats, their habitats, the threats they face, and how they’re getting more people involved in conservation. Each video is also accompanied by educational materials for teachers and parents to continue the batty fun offline. The videos aim not only to teach, but also to inspire even more kids to get involved themselves.

“We’re presenting them as movie stars, and the fact is, they really are,” said Cynthia Sandeno, a partner with the “Bat Squad!” initiative and a U.S. Forest Service specialist in threatened, endangered and sensitive species “It’s absolutely incredible that you have these kids doing work that professional wildlife biologists are out there doing.”

Here’s a peek at few of the webcast stars ahead of their national Bat Week debut. 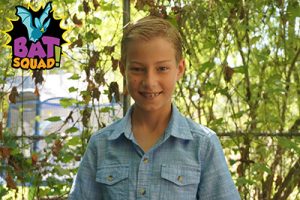 Calvin uses GIS technology to chart with
bats near his home in Texas
Credit: Miceala Jemison

First introduced to live bats in 2015 as a fourth-grader, Calvin Carpenter began to wonder if WNS had any chance of reaching the as-yet-unaffected populations of bats near his home in Lubbock, Texas.

With some digging, he learned that the nearest affected population was in Franklin County, Ark. With the help of his mother Penny, an instructor of geospatial technology, Calvin created a map that charted the maximum summer habitat ranges of the Texas bat populations around Bracken Bat Cave and the counties in Arkansas where WNS was known to occur. His maps—which translated to a first prize in a regional science competition—showed that even if both populations of bats strayed well beyond the extent of their known summer ranges, the fungus-carrying tri-color bats in Arkansas was unlikely to overlap with the Mexican free-tails of Texas.

“Bats migrate,” Calvin said. “Even though white-nose only grows in cold weather, I’m afraid that it could somehow become adapted to warmer temperatures and wipe out all bats down here too.”

Lindsey Hefernan, a wildlife biologist for the Pennsylvania Game Commission who maintains maps of WNS spread, furnished Calvin with the maps he needed.

“It gives me hope when I see a young person like Calvin thinking about such a complicated topic,” Hefernan wrote via e-mail. “It’s also important that he’s thinking ahead and preparing for when the disease hits home.” 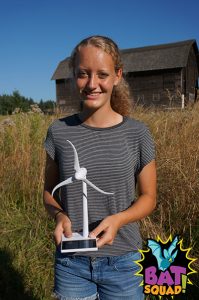 After a conversation with her parents Tonja Willey and Mary Pettenger about wind turbines and bat mortality, Camryn Pettenger-Willey got the bug to know if anything could be done about it.

Knowing that scientists, like BCI’s Cris Hein, are developing sound deterants for bats, Camryn sought to find the best placement for them on wind turbines. Using a deer whistles as a substitute, Camryn experimented with a sonic device and acoustic analysis on smaller fans to see where an emitter would be most effective. Surprisingly, she found that devices produced the most consistent sound when mounted on a fan’s central nacelle rather than on its blades.

Not only did her project win her “best of show” in her category at the regional level, she was invited to present at the Oregon state science fair and selected as a semifinalist in the national Broadcom MASTERS science competition.

“The science fair helped spread my ideas, and it went pretty far,” Camryn said. “But anyone can start with a small idea about how they can get involved in helping bats.” 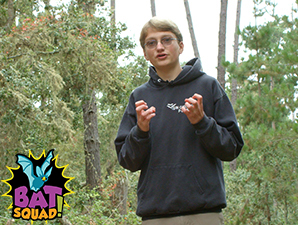 Oscar is a member of
Team Chiroptera
Credit: Miceala Jemison

From the time he was five years old and his mother, Edie Rue, was tucking him into bed with yet another rendition of Stellaluna, Oscar Scholin has loved bats. Fast forward to 2014, when as a 7th grader, his science teacher Kelly Terry asked him if he’d be interested in joining Team Chiroptera. The new school club would be studying bats in and around Monterey Bay, Calif.

Comprised of a core group of seven or eight kids that meet during lunch and after school, the team devised their first research project only with guidance from Mrs. Terry and local bat ecologist Dave Johnston. Seeking to learn whether the activity of bats in a given area differed depending on the size of the available habitat, they used audio recorders to collect bat call data at more than a dozen pine woodlands around the area. They expected that larger habitats would yield evidence of more bat activity, while smaller-sized areas would produce fewer recorded calls.

Team Chiroptera found the exact opposite: the activity numbers were more or less the same no matter the size of the habitat. The students realized that with only one detector per habitat, they probably weren’t picking up on all the bats that could be lurking throughout the larger areas.

“What’s neat about Mrs. Terry and Dr. Johnston is that they let the kids come up with their hyposthesis all on their own,” Rue said. “It isn’t a preconceived idea they inserted the kids into. It’s a sign of good science that it lead them to more questions.”

Their work ultimately brought them to the 2015 symposium of the North American Society for Bat Research, where they presented a poster on their findings.

Oscar helped recruit new students into the club the following year, but now, as a new high school freshman, he’ll only be able to help out after school hours. It doesn’t seem to be slowing him down: just this past July, he was out in the field with Mrs. Terry and the other Team Chiroptera members, using bat detectors to find where bats liked to hang out the most around a local park. The sight of a group of kids and adults all staring up into the night sky attracted the interest of a random passer-by, who expressed surprised delight when informed they were looking for bats.

“It’s an awesome opportunity to go out and do real science,” Oscar said. “And you don’t always need fancy equipment—just genuine interest and determination. There just are some things you can’t learn in the classroom.” 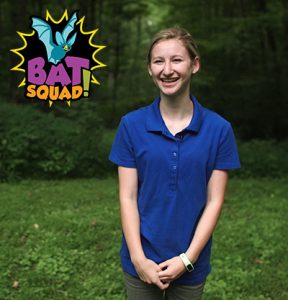 From the breezeway of her home near Gatlinburg, Tenn., Alexis Valentine has a front-row seat to the natural riches of the forests surrounding her. And no sense in waiting until she was older to get out and explore it — since the third grade, Alexis has been helping to track and research bats in and around the Great Smoky Mountains National Park.

Accompanying her mother, Amy Emja, on a mist-netting expedition to look for evidence of WNS with Joy O’Keefe, a researcher from Indiana State University, Alexis said,“It was love at first catch.”

Called “Bat Girl” by her friends, a moniker she’s happy to assume for herself but also as an homage to bat champion Merlin Tuttle, whom she deeply admires and who has personally encouraged her in her pursuits.

“If you’re one of my friends I start talking about this, they go, ‘oh lord she’s going off on one of her bat rants again,’” Alexis laughed. “But it needs to be addressed, multiple times.”

Her science fair projects and presentations on bats and WNS have won her multiple accolades, including a fifth place overall in the Tennessee science fair, and just this spring, grand champion in her division for the Sevier County science fair. Alexis said that the process of researching bats — or any science — can be slow and frustrating, but encouraged aspiring bat conservationists to be patient and persistent.

“Guano happens,” Alexis said. “You can have seven months of research, and sometimes it blowsup and you have to accept that. I’m just glad it’s not my 20-year quota that’s all falling to the floor. You’ll have to overcome roadblocks through any project. Not even just in animal science — but in anything and everything.”

Meet the rest of the Bat Squad! 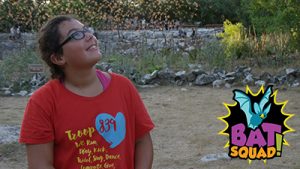 Eowyn is a Girl Scout from Dripping Springs, Texas, who likes soccer and horseback riding. She first got interested in bats through her biologist father. Eowyn and her fellow Girl Scouts share their love of bats whenever they visit local Bracken Cave, the largest bat colony in the world. 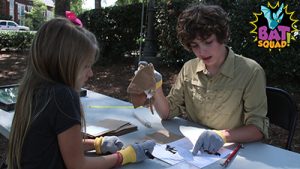 Logan loves to teach other kids about bats. He travels with his biologist father teaching kids in an exhibit called Be a Bat Biologist. Logan loves animals and when he leaves the bats to go home in Muncie, Indiana, he likes to take care of his two dogs, lizard, frog, turtles, and fish. 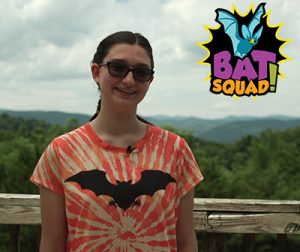 Racheal from Fairfax Virginia, likes to read, draw, and go kayaking as well as tell everyone she can about her favorite animal- bats!  For the past few years Racheal has been working with The Save Lucy bat rehabilitation center to help injured and abandoned bats as well as writing her weekly blog – the Baturday News! 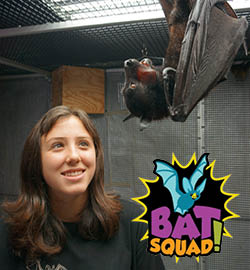 Madison has always loved bats. She is an accomplished bat educator, often travelling with her father, the founder of Michigan’s Organization for Bat Conservation to libraries, schools, and museums to tell others about amazing bats are. She recently gave a TEDx talk at her school in Lake Orion Michigan where she promoted bats conservation.