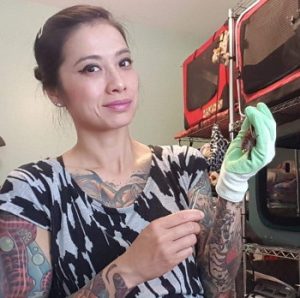 Kim O’Keefe believes that bats are amazing and her artwork captures their energy and personality to help others see them in a more positive light.

Kim O’Keefe loves bats. We mean she LOVES them! This love of bats began in an animal shelter in Northern Virginia and has continued to grow as she learns more about these amazing animals. Through her volunteer work with the Save Lucy Campaign, Kim learned about the Bat Week campaign. Through her artwork, she is helping us educate the world about the value of our bats. Here’s more about Kim’s story.

Kim started working in an animal shelter in the DC metro area in 1996. She split her time between veterinary hospitals, gaining hands-on experience in animal care and medical management. Aside from dogs, cats, and birds, the shelter handled all forms of wildlife. Unfortunately, on the rare occasions that they received bats, the bats were promptly euthanized due to “exposure.” Despite being a progressive organization, they were unfamiliar with bats and provided outdated information to the public and the animal care team. While they had rehabbers for raccoons, foxes, squirrels, raptors, etc., they had nothing for bats. 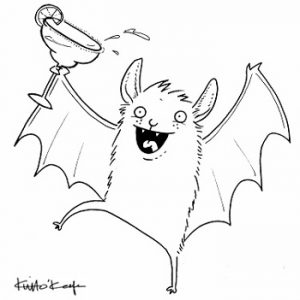 During the winter of 2012, a citizen brought in a bat that had been found on a pile of mulch outside. The bat was lethargic and cold. Kim knew that she had to do something. This situation called for a change in how the facility assessed and made decisions for bats. That’s when Kim found Leslie Sturges with “The Save Lucy Campaign.” Kim dropped the bat off to Leslie that evening, received a tour of her rehab area, and the rest is history. Kim was hooked!

Kim began making sure that the bats that came into the shelter were taken to rehabbers whenever appropriate. And, she began volunteering for Leslie. She eventually joined the rehabilitation team, and now she specializes in displaced adults, seniors, and special needs bats. Isn’t that amazing?

Because Kim had been drawing since she was a small child, it only seemed natural to use that talent to help bats in another way – through education. Being able to work directly with bats has helped Kim draw them in a way that brings them to life on paper and gives them a sense of humor and approachable look. “I can picture all the bats in my care as one of my doodles,” said Kim. “I guess I feel connected with them and that translates to the drawings I put out, hopefully the public will see them in a more positive light.” 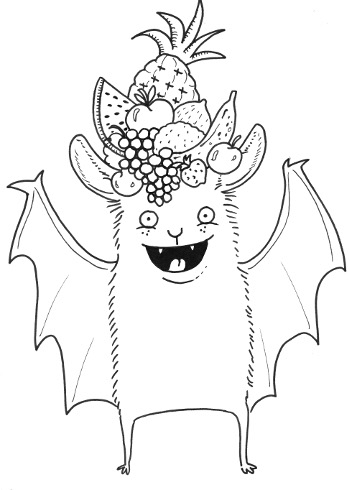 Kim is constantly inspired by bats and the need to spread the word about their importance. Her biggest challenge is to create a character in a few strokes that will draw the viewer in, to listen, and to learn. Her artwork is simple, quirky, and fun. Each of her doodles captures a moment or mood, so she likes to draw on the spot.

When asked what her favorite bat species was, Kim quickly answered – hoary bats. “They are my favorite because of their size, beautiful markings, and “bouffant” hairdos,” Kim stated. “From my experience, they are mellow, good patients, tolerate medical care and treatments well, and as long as they have food in their mouth, you can do pretty much anything to them!”

Kim stressed the importance of being a licensed rehabilitator if you are going to work with any wildlife species. And, if you aren’t able to follow that path, there are still a lot of other things you can do to help bats.