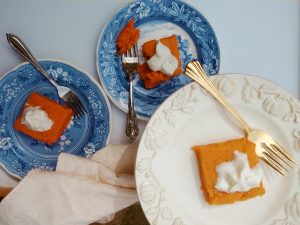 Directions:
Preheat oven to 350 degrees F.  Grease a 13 x 9 x 2-inch baking dish. In a large mixing bowl, whisk together sugar, flour, baking powder, salt, cinnamon, ginger and nutmeg. In another large bowl, whisk together eggs and pawpaw pulp until smooth. Whisk in milk and vanilla. Whisk in melted butter. Pour into sugar mixture and stir only until combined. Pour batter into prepared dish. Bake for 50 minutes or until just set in the center. Cool to room temperature on a wire rack before cutting.  Serve with a dollop of sweetened whipped cream. Serves 12 people.

Additional information:
The pawpaw is strange fruit that taste like a hybrid of sweet potatoes, bananas, papayas, avocados, and really ripe mangoes. It is related to the tropical fruit, the chirimoya, or custard apple. This odd, goopy-textured, tropical-like fruit can be found scattered all over the country, but recipes (for cakes, pies, puddings) abound largely in West Virginia and nearby states like Kentucky, Ohio and Indiana. Pawpaw pudding is usually served as a holiday dessert during Thanksgiving and Christmas.

Cultural significance:
For centuries, the North American pawpaw has been a delicious food source for Native Americans, European explorers, settlers and wildlife. Pawpaws were well known to several U.S. Presidents, including George Washington, who was fond of pawpaw fruit and ate them for dessert when they were in season, and Thomas Jefferson, who cultivated pawpaw trees at Monticello.

It’s hard to overstate the importance of pawpaws to the survival of early pioneers. As the first settlers left the established colonies in the east and pushed westward, they often subsisted on wild game and highly nutritious pawpaws that grew abundantly. The Lewis and Clark Expedition from May 1804 to September 1806 was the first American expedition to cross the western portion of the United States. President Thomas Jefferson commissioned the expedition shortly after the Louisiana Purchase in 1803 to explore and to map the newly acquired territory, to find a practical route across the western half of the continent, and to establish an American presence in this territory before Britain and other European powers tried to claim it.

The campaign’s secondary objectives were scientific and economic: to study the plants, animal life, and geography, and to establish trade with local Native American tribes. Tasked with keeping a written record of their journey, several members of the expedition kept daily journals of their activities. In the first published account of the expedition by Sergeant Patrick Gass, it was during the fall of 1806 that explorers Lewis and Clark, a slave known only as York (owned by Clark) and their guide, a woman from the Shoshone tribe, Sacajawea, depended almost entirely on wild pawpaws and nuts when their rations ran low and game was scarce. In a journal entry dated September 18, 1806, it was noted that the group were “entirely out of provisions” but “appear perfectly contented and tell us that they can live very well on the pawpaws.”