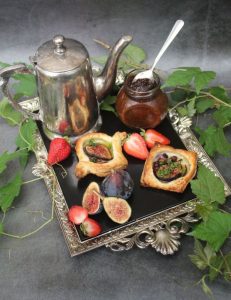 Directions:
This a flavorful snack that that you will enjoy during fig season, which is usually from June until September in the United States. Heat oven to 425 º F.  Brush each square with olive oil and sprinkle with Parmesan cheese. Top each square with onions and half a fig.  Brush more oil over fig and onions, lightly season with salt and pepper and bake for 18 to 25 minutes or until golden brown. Remove from oven and place the tarts on a wire rack, allowing tarts to cool, about 5 minutes.  To serve, place on a serving tray and enjoy.

Role of bats in the recipe:
Bat species and role in providing ingredient(s): Bats generally pollinate plants that bloom at night. They are attracted to large, white or pale-colored blooms measuring 1 to 3 ½ inches (2.5 to 8.8 cm.) in diameter. Bats like nectar-rich, highly fragrant blooms with a musty, fruity aroma. Flowers are usually tube- or funnel-shaped. Bats feed on the insects in the flowers as well as on the nectar and flower parts, such as calabash, sausage tree, areca palm, kapok tree, banana. According to the United States Forest Service Rangeland Management Botany Program, more than 300 species of food-producing plants depend on bats for pollination, including figs, which are pollinated by the common fruit bats (Chiroptera: Pteropodidae)

Additional information:
Figs originated in Asia Minor and were brought over to America in the 16th century. Figs were historically used to sweeten dishes before refined sugar was an option, and they continue to be used in such a way in many parts of the world today. While dried figs are available all year around, fresh figs are usually available in the summer and fall in the United States. They taste like a mellowed cross between a peach and a strawberry. Their unique texture, and ability to be simultaneously chewy, soft, and crunchy, is what makes fresh figs so appealing and popular. There are several different varieties of figs. They range in color from green or greenish-red when ripe, to the deep purple that most people are familiar with. The most commonly recognized varieties are: Black Mission figs, Brown Turkey figs, Adriatic figs, or Calimyrna figs. Taste-test each of them to determine which type suits your palate best.