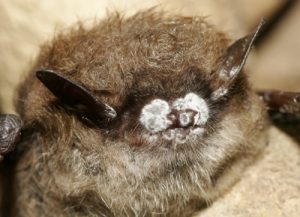 Bats are in decline nearly everywhere they are found. These amazing animals face a multitude of threats including habitat loss, pesticide use, destruction of roost sites, over-harvesting for bush-meat, climate change; and much more.

Worldwide, about 24% of bats are considered critically endangered, endangered, or vulnerable. Bat numbers in the United States and Canada have declined dramatically as a new disease, White-Nose Syndrome (WNS), has killed over six million bats in just eight years. This, coupled with impact from wind energy, habitat alteration, and roost disturbances, has caused serious decline in bat populations in North America as well as around the world.