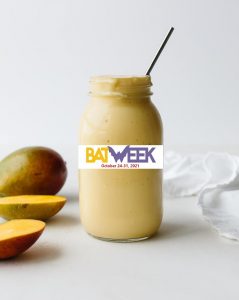 Directions:
Add all ingredients to a deep blender and put on high power for 2 minutes. Pour into glasses and enjoy! This recipe serves 4.

Role of bats in the recipe:
Wild bananas are an ancient group that evolved with bats, their pollinators, over 50 million years. (From Bat Conservation International’s “It’s No Trick: Bats Bring Treats”). Almond groves are protected by bats through pest control, while some bats are also known to consume and disperse almonds.

Indian Almond Trees (Terminalia catappa) are visited by flocks of Mauritian Flying Foxes (Pteropus niger), who consume the fruits and spread the drupes widely. Many tropical bats, including the Indian flying fox (Pteropus giganteus) disperse the seeds of the cashew tree in India (From BCI), while other bats pollinate cashew flowers.

Mango fruits and seeds are dispersed by Sowell’s short-tailed, Jamaican fruit-eating and Toltec fruit-eating bats, among others, who have taken the place of the extinct giant sloth and the Gomphothere in helping with this aspect of mango reproduction. Coconut palm trees enjoy some pollination assistance from bats, who also roost in their branches.